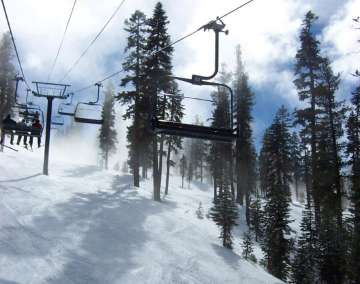 Soda Springs is the gateway to the Summit. Here you’ll find the Post Office, General Store, several small businesses and restaurants. In addition to the “commercial section” there is a cluster of houses opposite the General Store and more running along and behind Donner Pass Road. All properties behind Donner Pass Road are on dirt roads and hike-in only in winter. About 40% of these homes are occupied fulltime. The average price for homes in 2005 was $495,000 and $140,000 for lots.

Did you know that. The actual Soda Springs proper is 14 miles South on the North fork of the American River. Today’s Soda Springs was called “Tinker’s Station” from 1867 to 1874. In 1873 Mark Hopkins bought 80 acres from the Central Pacific and later the name changed to “Soda Springs Station”. It had a nice hotel and was the second largest sheep-shipping center in the state! All the freight going to the mines of the backcountry arrived here and it was the center of great poker games and gambling of this region. It has been said that the value of an entire band of sheep changed hands on the flip of a card.